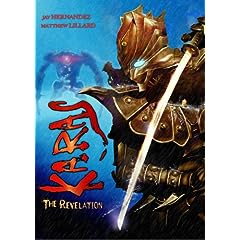 Took bloody ages to get home last night there was a fatality on the local line between Birmingham International and Birmingham New Street which meant we had to find alternate means of travel to get to the city. By the time I got home I felt exhausted. Richard is working the late shift this week so I had the house to myself and decided to make some food and finally get round to watching Karas:Revelation, the long awaited sequel and conclusion to Karas:The Prophecy which I reviewed a couple of months ago.

The sequel picks up exactly where the first movie ended it’s a much darker movie than the first and the plot remains sophisticated and very complicated, but the movie answers all the questions that we were left with at the end of the first movie. One of my previous complaints was that the first movie didn’t focus a great deal on Otoha the hero of this saga which felt quite frustrating because we never really got a sense of who he was, or how he was chosen to be Karas. Much of the first half of this movie is devoted to Otoha  and you learn who he was and how he first became a Karas. This part of the movie is extremely dark and bloody, I don’t want to spoil it, but you recall that only those who have known extreme sorrow can become Karas – well it’s fair to say Otoha fits that description.

In terms of it’s presentation and production quality this film surpasses the original – the seamless integration of 3d and 2d animation is absolutely stunning, and the soundtrack is brilliant! I really enjoyed the film – and found that I was engrossed from start to end – if you haven’t seen this series … then watch them – it’s anime at it’s very best!