Last weekend I met up with some of my team mates from {TWR} for one of our annual get-togethers. Rather embarrassingly I hadn’t bothered to even find out where we were spending the weekend till the night before – several months ago when the plans were first made I think I said something like … “I don’t care where it is, I’ll be there!”, and never really got round to checking on how the guys were getting on with organising the venue, but that’s really a testament to how much I trust Alan and Wim. previous venues for our get-togethers have included New York, Ghent in Belgium, Oxford and an assortment of other cities around the UK.

For those who don’t know {TWR} stands for Team Wolfenstein Resource, its an FPS gaming clan that plays several games created by idSoftware, these include the original Return to Castle Wolfenstein, and it’s sequels Wolfenstein Enemy Territory and the recent Enemy Territory Quake Wars, some of us also play Quake 4. We are, as you might imagine, a pretty diverse bunch – if the phrase unity of opposites ever applied to anything then its definitely a moniker that fits {TWR}. Whilst it’s easy to try to dismiss us a bunch of gaming geeks the reality is that although we all share a common interest the friendships that we have formed have transcended that – the truth is the game is now simply a way we keep in touch, rather than the reason we do. Events like this are really so we can all catch up and see how everyone is doing. 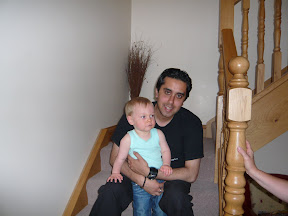 This get-together was special because it was the first time Mike, the founder of Wolfensteinresource.com was able to attend given that he lives in Melbourne in Australia. We chose a weekend that we knew he’d be in the UK visiting relatives with his wife Analina and their son Brodie, who spent most of the weekend clambering over me or chasing me round the kitchen table – he’s a wonderful kid! The weekend was full of humour, it’s a {TWR} tradition to make fun of each other as much as we can, and whilst I’m not going to recount any specific things here, I did laugh my head off when Wim presented me with a radio controlled K.I.T.T car from Knight Rider – it’s an ongoing joke 🙂 . Like all of our events it was awesome, the house that Wim found for us to stay in was amazing and the day out in Stratford Upon Avon was also a lot of fun 🙂 It was nice to leave everything behind for a weekend and simply have a laugh 🙂 even if it was mostly at my expense ( thanks Alan! 🙁 lol ). I can’t wait for the next one.

To everyone who took part I want to say … Thank You!

4 thoughts on “{TWR} Meeting in Knightcote”