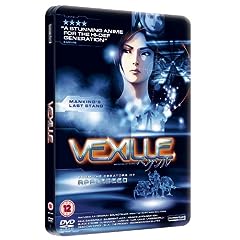 Set in the year 2077 relations between Japan and the rest of the world have deteriorated to the extent that the country has cut off all communication with the other inhabitants of Earth. Vexille is a female commander who leads a team of U.S. special forces, named SWORD, who have been charged with infiltrating Japan to discover the potentially dangerous technological advances the country is making. Their mission, and their discoveries, reveal that the Japanese have created a new breed of android virtually indistinguishable from human beings. I really enjoyed this movie, which came as no real surprise because it was made by the same people that created excellent Appleseed. The sound is excellent, and the visuals use the same superb blend of 2D and 3D animation that made Appleseed so memorable. This movie is not dubbed into English which might disappoint some people, I personally don’t mind watching it in Japanese with subtitles. If you like Appleseed then you’ll almost certainly love this, whilst it is somewhat formulaic the action is breathtaking. 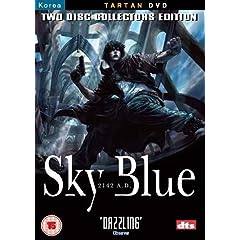 Sky Blue
An environmental catastrophe has left the future of mankind in the year 2140 fighting against extinction. Slaves inhabit the outside world whilst the lucky ones live in comfort in Ecoban. One man dares to fight against the injustice – he enters the city to find its secrets and bring freedom to the slaves who have been consigned to an early death. This movie had me captivated from start to finish. The animation is flawless and the attention to details is absolutely breathtaking. This film also uses a blend of 2D and 3D animation and actually surpasses almost every other such anime I’ve seen ( yes that includes Appleseed!). The plot is somewhat convoluted and the ending did leave me with more questions rather than answers, yet to me that didn’t take away from how much I enjoyed the movie. 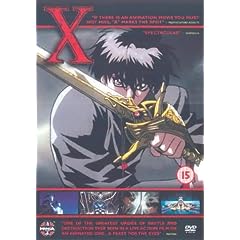 X
I have no idea where to start with this. It has to be one of the most confusing anime’s I have seen, yet it’s absolutely briliant. This falls squarely into the realms of old skool anime. Yet I have to admit I enjoyed it. It is pretty violent, so I wouldn’t recommend it to anyone who is squeamish. In a nutshell its about good vs evil. Tokyo is the city where the final battle between the Dragon of Earth and the Dragon of Heaven will take place The Dragon of Earth wants to wipe out humankind because of the damage people have inflicted on the Earth, while the Dragon of Heaven is fighting to protect civilisation. At the centre of all this is Kamui, the chosen one, who must pick a dragon to fight for. It’s a deeply philosophical movie, far more so than I expected. It also has that eerie haunting beauty that makes it so memorable. Definitly one to watch.