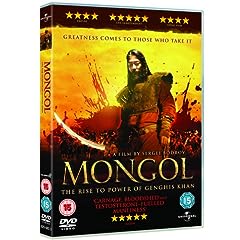 Finally got round to watching Sergei Bodrov’s visually stunning Mongol – The Rise To Power Of Genghis Khan. The movie is a sweeping epic that is rumored to be the first part of a trilogy that Bodrov is making about the Mongol ruler. In this film though Bodrov focuses on the life of the young Temudgin and his ascent to power.

When his father is poisoned and his lands and posessions taken, Temudgin flees from his father’s rivals. He is saved by a young prince, Jamukha, and the two become blood brothers. Later that bond of friendship is tested, though, when the grown Temudgin wages a war, in violation of the Mongol code, to win back the captive wife Borte. As Temudgin asserts his own power, he must also face Jamukha in all-out battle if he is to secure the safety of his family. The movie offers a unique look at the influence of love and loyalty to the life and times of one of history’s most renowned rulers.

This film isn’t historically accurate and is very much a revisionist account of the early life of the enigmatic Genghis Khan. This fact didn’t make the movie any less captivating, or enjoyable. It is a gorgeously shot epic, with beautifully composed landscape shots punctuated by thundering hooves and bloody, slow-motion battle sequences.

2 thoughts on “Mongol: The Rise To Power Of Genghis Khan”