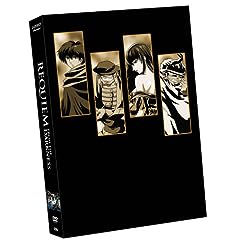 I finished watching the series Requiem From The Darkness this evening. It’s easily one of the most disturbing series I think I’ve ever seen, even for an anime! The series comprises of thirteen episodes which are roughly half an hour long each, and absolutely not for the squeamish or feint of heart.

Brief synopsis
Towards the end of the the Edo Period, Momosuke, the son of wealthy merchants turns his back on his family’s profession and decides to become a writer. He comes up with the idea of of writing a collection of stories about the mysterious and the supernatural. After a chance encounter with a monk and his strange associates on a snowy mountain Momosuke is drawn into a world of darkness he can scarcely begin to imagine. Momosuke travels with the trio who have sworn to cleanse the land of corruption: Mataichi, the mysterious monk; Nagamimi, a massive figure who is seemingly a master of disguise; and the beautiful bt deadly Ogin. This trio of strange characters travel the countryside dispensing their own form of karmic retribution on the truly evil.

Review
The very first thing you notice about this series is it’s very unusual and unique visual style. For instance the character are drawn in wildly different styles. The four main protagonists are drawn in a in a rather traditional anime style, but all other characters that are tangential to the story are drawn in a very surreal manner – with almost grotesquely proportioned bodies, enlarged heads, and often missing facial features. This gives the series a very creepy feel. It’s not just the characters, the sky is often a strange purple color, and for some odd reason lakes appear red in this world.

As for the story – the series tries to examine human psychology. Whilst the supernatural does feature in this, it’s the all too real corruption of humans that is central to this – moral and ethical corruption and how it effects people is really what this series is trying to explore. It raises many questions not least of which is the morality of the three outlaws and their method of punishing the criminals, which are truly disturbing at times. Of course so too are the crimes that they are punishing which include incest, murder, witch craft and even cannibalism. Which is why this series complete deserves the 18 certificate it has. Whilst there are sexual themes, there is nothing gratuitous, in fact the same is true of the violence which is also often implied, but the atmosphere the series creates is what drives you to imagine the worse, when you are left to fill in the blanks. It does make you jump at times, and on a couple of occasions made me feel nauseous!!

I have to admit that I enjoyed this series! But that being said I must also confess that even I struggled with the nature of some of the themes it explores. So be warned!