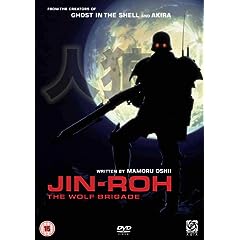 It’s not often I watch an anime, or any movie, that not only moves me but forces me to ask questions about society and our shared humanity. Jin-Roh is a title that has hovered around my awareness for years but I’ve never gotten around to watching it, at least not until today. It’s an exquisite work that transcends genre.

The story is complex and full of depth and some strong characterization, this a very serious movie; so for those who Ilike your robots and bikini girls, with hyper-guns and the whoosh of rapid-fire manga, this is probably not for you! This movie is thoughtful and contemplative … and will leave you feeling introspective.

The story is set in an alternate reality in which Japan has emerged from the second world war as Totalitarian society… The population riots, a group called the Sect creates havoc, and the armored Special Unit of the Capitol Police Organization (CAPO) plots to acquire more power. A soldier named Fuse, who was once one of the most formidable men in the Special Unit, agonizes over the death of a young girl who worked for the Sect and in doing so he becomes a neurotic mess intent on befriending the dead girl’s sister.

The opening ten minutes of the movie hooks you, it begins with a chase under the streets of a rioting city in whic two groups, Sect and the CAPO, which represent two diametrically opposed points of view come into violent conflict. Away from the riots, and killing, a heavily armed trooper hunts and corners a mule, a young girl carrying explosives for use against the police forces. The rest of movie is revolves entirely around the question of why the soldier does not shoot her, its a question that occupies the lead character, his co-workers and us as the audience as we watch him and wonder we can’t let go of her self imposed death. This is a slow serious story, about suicide bombings, and blindly following orders, and humanity’s growth or lack of growth.

What surprised me the most was how much this story borrowed heavily from the tale of Little Red Riding Hood, it’s difficult to go into examples with ruining the rest of the story, however the female terrorists who carry bombs for the Sect are known as “Red Riding Hoods,” and Kei, reads a bloody version of the tale to Fuse throughout the film. The dialogue is fully of ethical question and moralistic observations, consantly question what it means to be human, for example when Fuse superior observes:

and he also when another of his superiors makes observation with regards to society:

.”.. apparently some animals when they dominate a group kill all the offspring of the other males under them, sometimes organisations do the same”

In my opinion Jin-Roh is a true masterpiece, and anyone who watches it will not be disappointed. 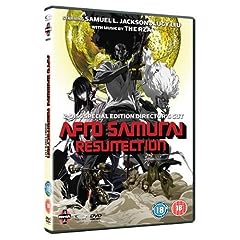 Afro Samurai:Resurrection
Last September I reviewed Afro Samurai which was one of the best anime’s I’d seen in a long time. By the end of the first movie Afro had avenged his father and found a life of peace. In this sequel that peace is shattered by the arrival of a woman from his past (Sio, voiced by Lucy Liu) who is intent in schooling Afro in the same brutal lessons he dealt those who stood in his way as he searched for the number one headband. In a revenge fuelled attack, Sio steals the number 1 headband as well as the skull of Afro’s dead father. With this she intends to resurrect Afro’s late father and torture him. This movie sees Afro restart his journey, he must first find the Number Two Headband so that he can earn the right to challenge Sio. Samuel L. Jackson reprises his role as Afro and again provides the voice of ‘Ninja Ninja’ Afro’s imaginary who symbolizes his inner feelings and always acts as the voice of Afro’s conscience.
Like the original series, Afro Samurai provides some great action with plenty of gore and limbs flying around the place, as well as the usual bittersweet, and often tragic drama that asks some pretty profound morale questions. The visual style of the animation is stunning, as is the musical score, which was performed once again by RZA of the Wu-Tang Clan. It’s a great continuation of one the best anime series I’ve seen in a long time. 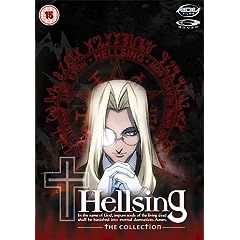 Hellsing – The Collection
The Hellsing Organization is a supernatural collective dedicated to protecting mankind from a war that rages in the Earth’s shadows in which humanity is only a pawn. Able to keep the dark forces at bay for so long, Hellsing has recently been coming across artificially spawned vampires so powerful that they can do nothing to stop them. So, the Organization calls in Alucard, a rogue vampire who combats this army of the undead with Seras Victoria, a female companion he rescued from death by vampirising. Whilst I found this series entertaining, and I did enjoy it a lot. It didn’t really feel like it had any depth. The series tries to build an aura of mystery surrounding Alucard and yet never really succeeds in explaining why such a powerful vampire decided to become a servant to a human master. Everyone should also also realise fairly quickly that ‘Alucard’ is an anagram of ‘Dracula’.

Mysterious Cities of Gold
Ok, so this isn’t really what I’d class as anime, but it is animation 😉 I recall how much in enjoyed this series as a child and couldn’t resist purchasing it when it became available last year. It’s take a while to watch it all, and I can report that it is still as wonderful now as it was then. For those who have never seen this or even heard of it, I recommend it thoroughly. This series comes from an era when story telling was paramount, watching it again I was surprised at how the series, although humorous and fun, required more maturity on the part of the audience than the sort of vacuous cartoons kids seem to watch these days. Plus I’ve always loved the opening score …

Many people have been mailing me and asking why I haven’t blogged in a few months, and where I have been. Well in short I took a month off to get married to Sadia 🙂 We are both very happy ;-). I’ve started putting pictures of our wedding into a set on flickr here, as well as some general scenic shots taken around Kashmir into a different set here. I have around 3,500 photos to organise and upload so you’ll have to bear with me 😉 Here’s a couple from the wedding pictures set: Seth Godin argues the Internet has ended mass marketing and revived a human social unit from the distant past: tribes. Founded on shared ideas and values, tribes give ordinary people the power to lead and make big change. He urges us to do so.

This is a great talk by Seth Godin, here’s how he describes Tribes …

What tribes are, is a very simple concept that goes back 50 thousand years. It’s about leading and connecting people and ideas. And it’s something that people have wanted forever. Lots of people are used to having a spiritual tribe, or a church tribe, having a work tribe, having a community tribe. But now, thanks to the internet, thanks to the explosion of mass media, thanks to a lot of other things that are bubbling through our society around the world, tribes are everywhere.

The internet was supposed to homogenize everyone by connecting us all. Instead what it’s allowed is silos of interest. So you’ve got the red-hat ladies over here. You’ve got the red-hat triathletes over there. You’ve got the organized armies over here. You’ve got the disorganized rebels over here. You’ve got people in white hats making food. And people in white hats sailing boats. The point is that you can find Ukrainian folk dancers. And connect with them … You can tell when you’re running into someone in a tribe. And it turns out that it’s tribes, not money, not factories, that can change our world, that can change politics, that can align large numbers of people. Not because you force them to do something against their will. But because they wanted to connect … That what we do for a living now, all of us, I think, is find something worth changing, and then assemble tribes that assemble tribes that spread the idea and spread the idea. And it becomes something far bigger than ourselves.

The talk resonates deeply with me at the moment particularly given that I’m currently thinking long and hard about what leadership actually means, how to build teams, what to look for when recruiting people, how to ensure everyone feels that they are empowered and that their contributions are valued. However the more I think about it the more I’m beginning to believe that whilst its possible to create an environment in which people can have the freedom to affect change it ultimately requires the individual to first believe in what they are doing, to have committed to it and to the people around them. They will then want to move things forward, improve things, affect real change and want to break the status quo. Seth crystallizes this sentiment beautifully in this talk when he says …

What all these people have in common is that they are heretics. That heretics look at the status quo and say, This will not stand. I can’t abide this status quo. I am willing to stand up and be counted and move things forward. I see what the status quo is. I don’t like it. That instead of looking at all the little rules and following each one of them, that instead of being what I call a sheepwalker, somebody who’s half asleep, following instructions, keeping their head down, fitting in, every once in a while someone stands up and says, “Not me.” Someone stands up and says, “This one is important. We need to organize around it.” And not everyone will. But you don’t need everyone. You just need a few people (Laughter) who will look at the rules, realize they make no sense, and realize how much they want to be connected.
…
You don’t need permission from people to lead them. But in case you do, here it is. They’re waiting, we’re waiting for you to show us where to go next. So here is what leaders have in common. The first thing is, they challenge the status quo. They challenge what’s currently there. The second thing is, they build a culture. A secret language, a seven second handshake. A way of knowing that you’re in or out. They have curiosity. Curiosity about people in the tribe. Curiosity about outsiders. They’re asking questions. They connect people to one another. Do you know what people want more than anything? They want to be missed. They want to be missed the day they don’t show up. They want to be missed when they’re gone. And tribe leaders can do that. It’s fascinating because all tribe leaders have charisma. But you don’t need charisma to become a leader. Being a leader gives you charisma. If you look and study the leaders who have succeeded, that’s where charisma comes from, from the leading. Finally, they commit. They commit to the cause. They commit to the tribe. They commit to the people who are there.

This is a great, passionate and deeply profound talk and I recommend everyone take the time to watch it.