In a discourse in Plato’s The Republic, the integrity of man is questioned and, perhaps, ultimately deemed to be fundamentally flawed: The Ring of Gyges is a mythical talisman that grants its owner the power to become invisible at will. Using the story of the ring, Plato’s Republic, explores whether a typical man would remain moral if he did not have to fear the consequences of his own actions, and that no man is so virtuous that he could resist the rings temptation or avoid becoming morally bankrupt by using its power. If morality is a social construct where we act out of necessity, then what happens if those social sanctions are removed, or you come to believe that they no longer apply to you? In the Republic, Glaucon made the argument:

Suppose now that there were two such magic rings, and the just put on one of them and the unjust the other; no man can be imagined to be of such an iron nature that he would stand fast in justice. No man would keep his hands off what was not his own when he could safely take what he liked out of the market, or go into houses and lie with any one at his pleasure, or kill or release from prison whom he would, and in all respects be like a god among men. Then the actions of the just would be as the actions of the unjust; they would both come at last to the same point. And this we may truly affirm to be a great proof that a man is just, not willingly or because he thinks that justice is any good to him individually, but of necessity, for wherever any one thinks that he can safely be unjust, there he is unjust. For all men believe in their hearts that injustice is far more profitable to the individual than justice, and he who argues as I have been supposing, will say that they are right. If you could imagine any one obtaining this power of becoming invisible, and never doing any wrong or touching what was another’s, he would be thought by the lookers-on to be a most wretched idiot, although they would praise him to one another’s faces, and keep up appearances with one another from a fear that they too might suffer injustice.

This is, and always has been, an interesting thought experiment. It’s one that I’ve wrestled with in the past, what would I do if I could do anything I wanted to, if there were no consequences? If power corrupts, then does absolute power corrupt absolutely? Would I be able to stop myself? Would any of us? H.G. Wells also explored this in The Invisible Man, as his character Griffin is transformed from a gifted young scientist, to a megalomaniac planning world domination. Perhaps the only memorable line from the movie Hollow Man, an adaption inspired by Wells work, was Sebastian’s (Kevin Bacon) observation:

“You know what, Matt? It’s amazing what you can do … when you don’t have to look yourself in the mirror any more”

As I said, its a fascinating idea, and one that I’ve been forced to dwell on again whilst watching the brilliant anime series: Death Note, one of the most unique and mind-blowing anime in recent history. 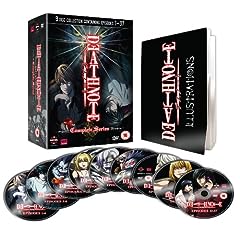 It’s the tale of a young man, Light Yagami, a brilliant young student, with perfect grades, perfect record, perfect looks etc. he’s a decent upstanding young man. All of that changes when a shinigami ( god of death ) drops his Death Note into Light’s schoolyard, where the young man stumbles across the enigmatic looking book and reads the instructions in it, the primary rule being: The human whose name is written in this note shall die. Light is initially skeptical thinking it to be a joke, but after experimenting with it he realises that the Death Note is real. Light, in a very real sense, becomes a living incarnation of the Gyges discourse, a seemingly flawless character, who is given the power to kill anyone in the world, and seizes upon this to create a new utopia with his god like power. He begins by entering the names of criminals into the Death Note:  murderers, rapists, serial killers, child molesters etc. his belief is that the world would be better without them.

As thousands of criminals begin to die suddenly around the world, the number of inexplicable deaths captures the attention of interpol and the mysterious detective known only as ‘L‘. It’s hard to describe L without falling back on cliches but he is a mysterious, enigmatic, eccentric genius. He has a strong sense of justice, yet his methods are sometimes as morally questionable as Lights. It’s the battle of wits that ensues between these two protagonists that makes this series such compelling viewing.

Light can only kill someone if he has seen their face and can visualise it as he writes their real name in the notebook, the more he kills the more he believes himself to be a God- eventually Light becomes more than just a self-styled God, he amasses a huge following under the moniker of ‘Kira’ ( which in typical Japanese is pronounced similarly to the english word “killer” ), and soon he begins to kill anyone that threatens his plans, including FBI agents and others that are attempting to discover his identity. L, however, deduces that Kira can kill people without laying a finger on them provided he has seen their face and knows their real name. Light recognises L as his greatest nemesis and so a cat and mouse battle between the two begins. Each racing desperately to discover the others true identity first – coming second means death. The suspense is exhilarating.

Being told I have to stay at home and rest is always difficult for me, I get bored very easily, so I thought I’d lye in bed and catch up with some feeds – when I came across the above talk. I’ve written about Karen Armstrong and the Golden Rule before, it was heartwarming to listen to her talk, she has so much passion and faith and hope for a better world, which I find inspiring. I know some people will argue about the practicalities of the Charter for Compassion which Karen is talking about. For me though, as a sentiment, as an ideal, or even as a hope I think its a beautifully simple and wonderful idea.

But it requires a change in each of us, which makes me wonder whether I’m strong enough to make that change.