Ok so I finally got the second season on DVD on Friday.

And yep I watched it all over the weekend. Theres 26 episodes each one is approx 25 minutes long. I’d rate it as excellent

I began watching it with a bit of trepidation, I kind of conviced myself it wasnt going to be as good as the first stand alone complex. If anything this was better! Whilst the show doesnt require you to have seen the first season or either of the two movies, it definitly does help if you have. There are references to the laughing man incident which the the first season was based around. Also the second season doesnt really contain an explanation for what a Standalone Complex is. So heres my definition: Standalone Complex is a theoretical mental complex which is attributed to the mass cyberisation of the public. The first series explained how standlone complex was a term used to describe copies that have no original and this is realised through copycat crimes that dont appear to have an original criminal, in other words they are based on the actions of an imaginary criminal. The first series was based around The Laughing Man, a mysterious cyber terrorist who Section 9 ( our heroes ) must battle against. (ok this is a spoiler less review!)

The second season which is a completely different story sees Section 9 investigating a terrorist group calling themselves the Individual 11, who are battling to see an independent state formed for refugees being exploited around japan. Both series deal with the corruption of government and the manipulation of public opinion through the manipulation of the media. Ironically watching the series made me think about current events and ask how much of what we are told is actually the truth or how much has been “spun” by politicians who are persuing their own agenda. But hey thats the topic for a different day.

The animation quality is awesome, the action mind blowing, but most of all the social and technological and ethical issues the show touches upon are not only thought provoking but do you force you to re-evaluate your own beliefs. Some of the discussions between the characters can leave you bemused though I did wonder whether I needed a degree in Pyschology and Politics to be able to follow some of the dialogue, but nevertheless it makes you think.

I thoroughly recommend it. And if you cant fork out for the box sets then theres always the Ghost In the Shell movies.

Got back from the gym this evening and figured I’d tidy up. Was sorting through my collection of DVD’s and VHS tapes when I found this little gem: 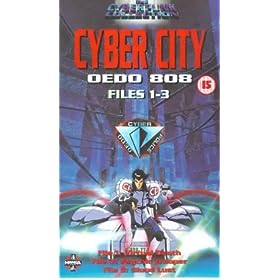 Can’t remember the last time I watched it, jeez it must have been at least 15 years ago! Anyway as i’m watching it now im suprised at how little its dated. The three part series amassed something of a cult following. It’s a Cyberpunk anime set in the year 2808. The basic plotline is that in the future in order to combat computerised crime the Police employ criminals with a history of violent and hi tech crimes. The twist is that these criminals all of have “Special Suspended Sentences” that carry prison sentences in excess of two or three hundred years. Each of these criminals receives a reduction in their prison sentence for each mission he completes successfully within a given period of time. If they fail to complete a mission an explosive collar fitted around their necks will explode and decapitate them.

There are three episodes, and each episode focuses on one of the three criminals: Sengoku, Benten and Go:Gol. The first episode Virtual Death, follows Sengoku as he must discover who has trapped 50,000 people in a a skyscraper only to discover that the man responsible is dead! The second episode Psychic Trooper pits Go:Gol against a military cyborg when its superiors decide to have it hunt him to prove its viability as a weapon. The final episode, Blood Lust, follows Benten as he investigates the murder of a geneticist and stumbles upon one deranged mans quest for immortality which has turned him into a modern day vampire.

The series is full of action, humour and cynism as you’d probably expect given that the heroes of this piece are criminals who have been forced to become police officers. It’s full of memorable one liners like “to err is human but to really f**k up you need a computer“.

The quality of the animation is excellent especially given that this was made before digital animation techniques became popular. The series was created by Yoshiaki Kawajiri who was also responsible for making a number of anime hits including Ninja Scroll, and one of my personal favourites Vampire Hunter D:Blood Lust, as well as being a key figure in the production of the Animatrix Project.

Anyway its been a bit of a blast from the past for me. Any of you anime nuts out there who like more contemporary stuff like the new Appleseed, Ghost in the Shell SAC etc. should really try to get a hold of this and check out one of the earlier works in this genre.

However it’s gotten me thinking about the pervasiveness of technology in society and how the works of contemporary visionaries such as Masamune Shirow the creator of the original Ghost in the Shell manga, and Kenji Kamiyama who dramatised it into the anime series, as well as other sci-fi writers who have touched upon this genre, most noticeably writers such William Gibson, Theodore Sturgeon, Isaac Asimov, Philip K. Dick etc. are all slowly being translated into reality. Shirow’s work however is focused more tightly on the ethical and philosophical ramifications of the widespread merging of humanity and technology. The development of artificial intelligence and an omnipresent computer network set the stage for a reevaluation of human identity and our sense of uniqueness … which has me hooked!

One of the overriding themes in Ghost in the shell, is how in the future the human race has been cyberized with most humans choosing to have some degree of cyberization, whether that is as little as having a cyber brain case installed to trading their human body for a cyber body free from the weaknesses of our natural form. In Shirow’s vision this cyberizations means human beings are wired into a massive connected network, with information out there in the net accessed directly by the brain. When someone isn’t connected to the net they are often referred to as being in autistic mode.

So where am I headed with all this?…

Well … with the growing popularity of existing services such as Second Life which is one of several virtual worlds that have been inspired by the science fiction novel Snow Crash by Neal Stephenson, it makes me wonder just what is the appeal with the idea of living in an artificial world.

Besides Second Life isn’t a game! It’s a virtual world where some users have gone as far as setting up real monetary businesses and are earning a living from it, for others its simply an escape from their First life. In either case its an interesting phenomenon, I’m not sure what it means for the human race, or even if it means anything at all, personally my First Life far too complicated enough without adding to it the pressures of a Second Life.

Or maybe its just my ghost whispering to me