Tomorrow is the fifth anniversary of my father’s death, it’s hard to believe that its been five years, and yet here we are; so much has happened, so much has changed and yet so much remains the same. I miss him so very much, I miss his wisdom, his humour, his strength but most of all I miss the comfort I felt simply knowing he was there. It was while I was thinking of him that I recalled this poem by Henry Wadsworth Longfellow … which somehow feels apt…

From time to time we all need a little inspiration. 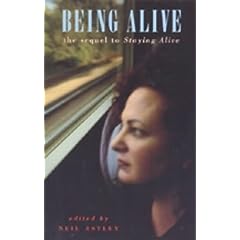 Alan and Fiona gave me a copy of Being Alive for Christmas. It’s an anthology of poems dealing with many themes and written by many many different authors. It is a wonderful gift and one that I’m really enjoying 🙂

Within the covers of this book I found a poem entitled Jerusalem by James Fenton. It seemed apt to share this poem given the current crisis in Gaza.

It’s hard to watch such scenes and remain dispassionate. It’s a conflict, and indeed a place, that polarizes opinion. Yet it disturbs me that Israel as a nation seems to have forgotten that no nation in history has succeeded, through force of arms, to subjugate an entire population forever. During the second world war Hitler came to the same realization and devised his ‘Final solution to the problem of the Jews’ which culminated in one of the most barbaric and evil acts in human history – the Holocaust. Yet sixty years on we now hear of Israeli ministers talking about a their own final solution or Holocaust in Gaza. It strikes me as paradoxical that people are often doomed to become the very thing they loathe the most, we are doomed to become what we behold. I recall vividly the moment when a Jewish friend of mine told me that in her opinion

the only the thing the leaders in Israel learn’t from the holocaust was how to become Nazi’s themselves.

I recall how shocked I was at that statement, it felt wrong. It felt especially wrong that a Jewish person could make such a comparison. As I watch the news reports though, and as I listen to the rhetoric coming out of Tel Aviv – I wonder if history will prove her right?

Getting back to the poem, I think it is extremely poignant and made so by the conflicting claims the city inspires which are expressed in the poem as alternating, mutually exclusive statements – this structure is a striking metaphor in itself.

Been feeling torn lately … so I’ve been reflecting a lot on why that is … was almost ironic that during my introspection I recalled a passage from one of Melville’s old poems, I’ve transcribed the piece below in full …