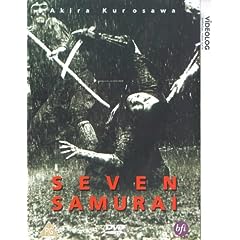 Akira Kurosawa’s Seven Samurai is not only one of the greatest films of all time it also happens to be one of my favourites. It’s one of those movies I tend to go back and watch more often than I probably ought to. It’s one of those films that for some strange reasons I take great comfort in, the sort of thing that I kind find inspiration in when I need it, or loose myself in when I don’t really want to think about something else, like today.

For those who aren’t familiar with it the plot revolves around a small villages struggle to stave off a group of marauding bandits. In order to do this they recruit Seven samurai to defend them, but because the village is so poor the samurai will be paid only the rice they eat. The film is over three hours long, in fact over an hour of the film is dedicated to the villagers struggle to find and recruit a number of samurai willing to fight for them, for so little reward.

The movie is very emotive,particularly in the opening half hour the plight of the farmers is almost unbearable to watch such is their suffering. The task of hiring samurai seems impossible especially when all they have to offer is rice. What makes this such a classic movie though is the depth of detail and characterisation Kurasawa provides, and the painstaking effort he makes in creating a sense of 16th century Japanese society. The interactions and tensions between the samurai and the villagers are frequent and often awkward, each group having its reasons to mistrust the other. The samurai could oppress the villagers as much as the bandits.

Call me a romantic but for me what makes the movie truly magical lies in how the heroism of the seven emerges in their willingness to do what is right, no matter the outcome, and to help those who need it without making judgements about their fallabilities or their occasional immorality. Even the end of the film is striking with the battle won the villagers celebrate their victory but ignore the samurai for whom they no lnger have any use, leaving the surviving samurai to reflect on the relationship between the warrior and farming classes.

Kurasawa’s movie was one of the first to use, the now common, plot device of recruiting and gathering a group of heroes into a team to accomplish and impossible mission. Another of my favourite movies The Magnificent Seven, is a recreation of this. In fact this movie served as the inspiration for a swathe of others, and there are many, like me, who subscribe to the view that Kurasawa’s classic pioneered the modern action movie. The final rain soaked battle scene is without a doubt one of the  most stunningly filmed sequences ever. If you have never seen this movie you must watch it , you will not be disappointed! 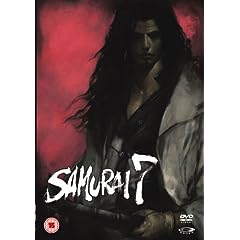 On the back of this I’ve recently finished watching the complete series of Samurai 7. This anime series is based on Kurasawa’s classic but sets the story in a bleak future where the bandits, or Nobesari, are plundering villages all over the land. These men are former Samurai’s who have abandoned their code of honour and adapted technology to their bodies until they no longer resemble humans.

The series is made up of  26 half hour episodes, and much in the same way Kurasawa dedicated so much of his film to detailed characterisation so too does this series. The quality of the animation and sound is absolutely superb. I thoroughly recommend it, but only after you have seen Kurasawa’s classic!