I finally managed to finish reading several books. The first I want to talk about is The Starfish and the Spider: The Unstoppable Power of Leaderless Organizations by Ori Brafman and Rod A. Beckstrom. 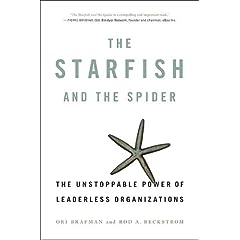 This is a excellent book that makes a very compelling case for decentralization in organizations and businesses. The authors contrast the Spider which represents top-down management, with the Starfish which is essentially headless … all its “legs” go in any direction it wants to … but the starfish still moves and is effective.

Whilst the first few chapters of the book present a couple of case studies and examples that serve to illustrate the main themes of the book. It’s really from chapter four onwards that the book picks up pace as the authors discuss operational principles behind decentralised organisations – the need for pre-existing networks as a substrate, the role of catalysts and champions to activate leaderless organisation, “circles” as their chief co-ordination mechanism, and “ideology” as the glue holding everything more or less together.

After reading the book I’m left feeling that the notion of leaderless organisations is unquestionably superior both morally and aesthetically – to centralised organisations. Partly because of their structural simplicity and elegance, but also, and more profoundly from my point of view, because they rely so openly on trust and the belief that man is fundamentally good and ultimately because they are capable of drawing the best from people and providing them with truthfulness, meaning and purpose in their life.

As an interesting follow up to reading the book here’s a talk Rod Beckstrom gave at Next Web in 2007, that touches on the main themes in the book: